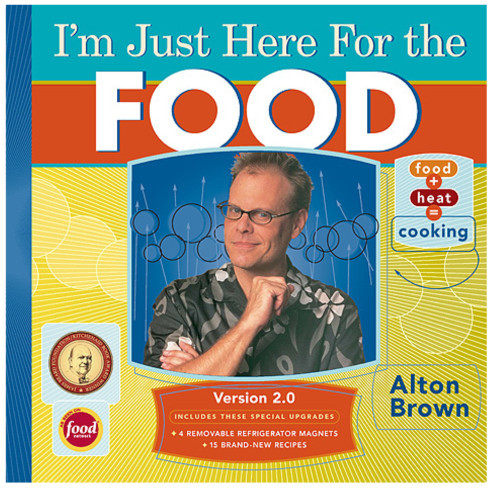 Eight years ago, Alton Brown set out to create a cooking show for a new generation. The result was Good Eats, one of Food Network's most popular programs. Four years ago, Brown set out to write a cookbook for people who would rather understand their food than follow a recipe. A mix of cutting-edge graphics and a fresh take on preparing food, I'm Just Here For the Food became one of the best-selling cookbooks of the year--and received the James Beard Foundation/KitchenAid Book Award as best reference book. This year, to commemorate and celebrate this success story (more than 300,000 copies in print), STC is pleased to announce I'm Just Here For the Food: Version 2.0. This special edition features 15 brand-new recipes, 20 pages of additional material, and 4 removable refrigerator magnets --along with everything that made the original a classic instruction manual for the kitchen. Each of the book's 15 sections is a module on a given cooking method--from pan searing to pressure cooking, stewing to steaming-- with a "master" recipe and a varied selection of recipes that epitomize the technique. The text is accented throughout with food facts, history and lore, and science. -------------------------------------------------------------------------------- about the author Alton Brown is the writer, director, and host of the popular Food Network television show Good Eats, and is the resident food historian, scientist, color commentator, and host of the network's Iron Chef America series. In 2004, Brown was selected the Bon Apptit American Food & Entertaining Awards Cooking Teacher of the Year. He is a regular contributor to Bon Apptit and Men's Journal magazines. He lives in the southern United States with his wife and daughter. Dimensions: 9.25" x 9.25" x 1 25"